@massoud - After thinking about your demonstration of the multilingual capabilities you have built into VuFind, I thought of one additional issue. The VuFind display has a placeholder image when the cover is not available, and the text in that image was in English even in the Arabic display. Is this another example of how it is important to have user interface elements configurable by language?

It does seem like a good idea to allow for that in the configuration models, even if we are able to support all of these features in the first release.

Here some examples on screens - shown at todays SIG meeting 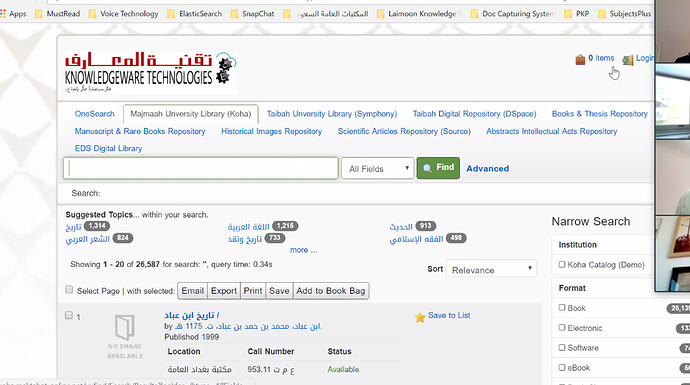 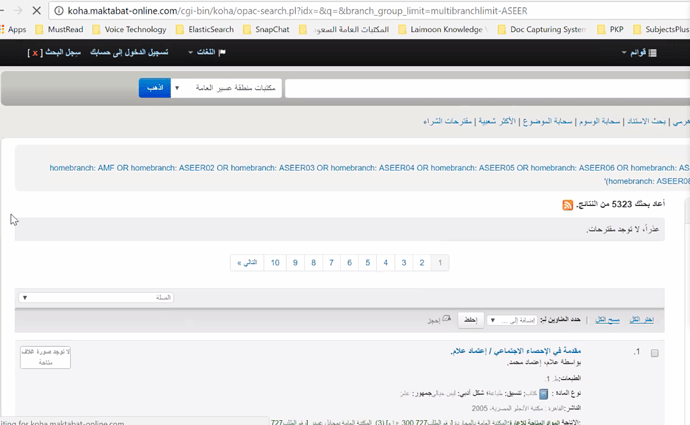 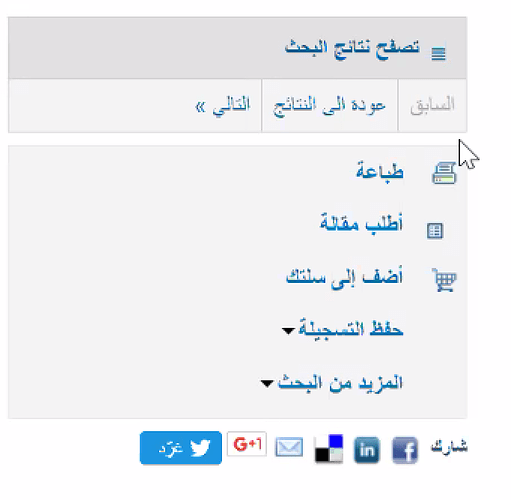 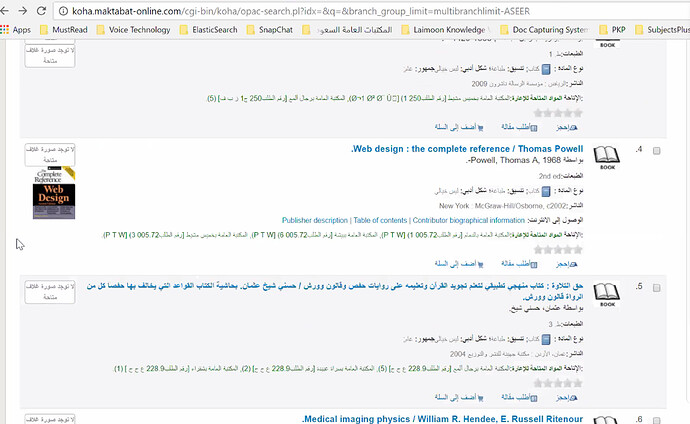 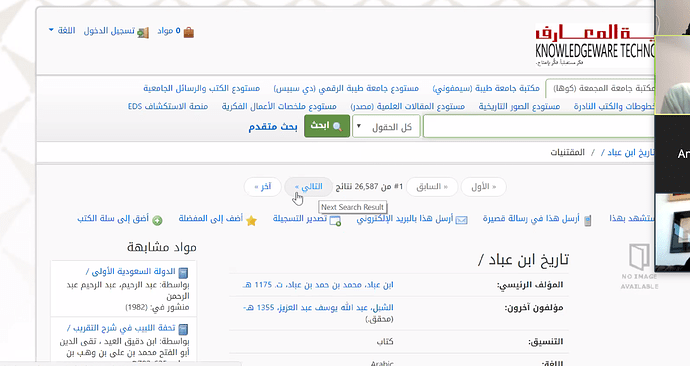 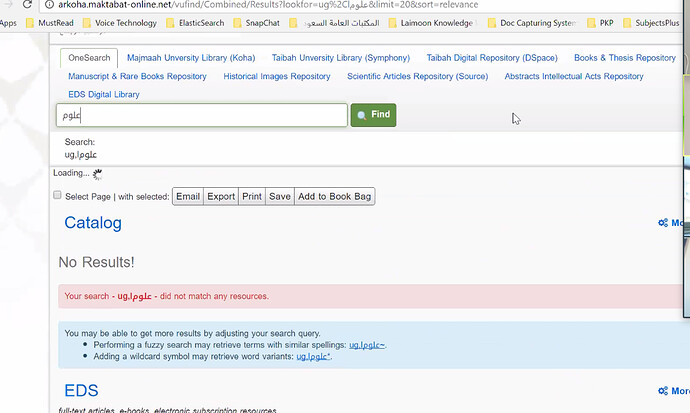 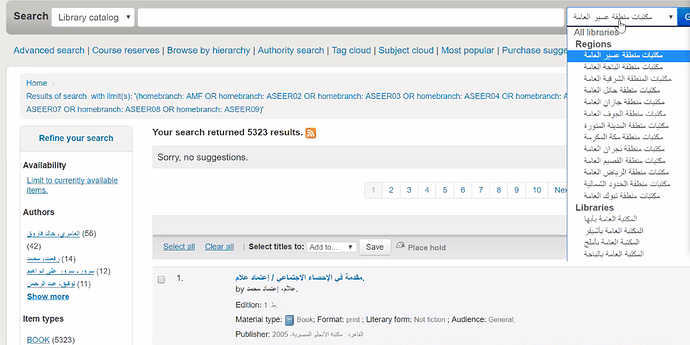 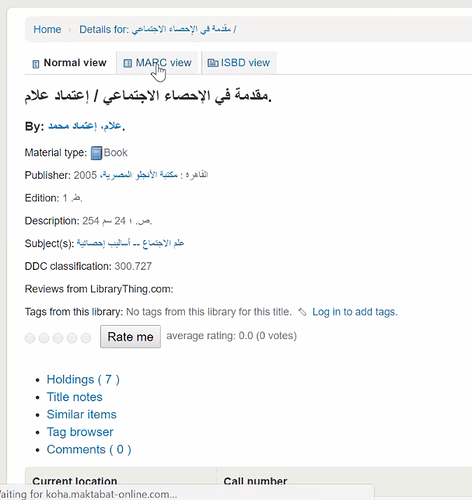 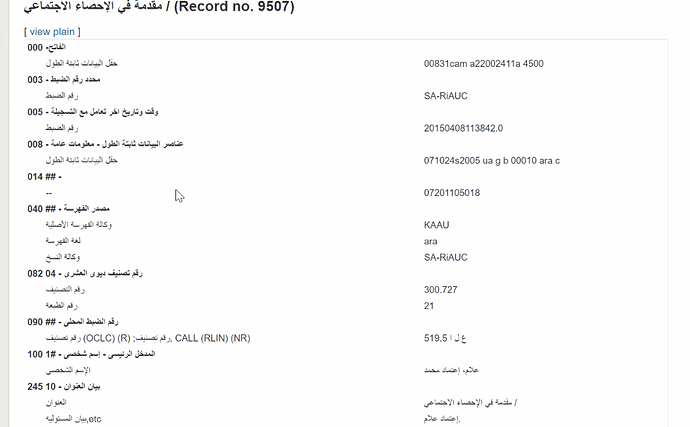 @peter - That is correct. Now in the case of the placeholder image for book cover, as in this Arabic VuFind page. I think it depends on the approach used in FOLIO when handling placeholder images. If the label text describing the image is part of the image itself, then the user interface elements configurable by language need to be there so that the system should pick those elements from that language placeholder images. If the text label is separate, then I guess those neutral images can be used with all languages and the label text describing the image can be grabbed from the corresponding language-based messages file.

However, in all cases the UI system should provide a handler for the directional images, like arrows, when switching between L2R and R2L screen orientations, like the case I showed yesterday with the L2R arrow showing the same at the bottom of each section in this Arabic VuFind page.
Here you can see the “–>” appearing to the right of the “More catalog results” text while in L2R, has persisted to appear as is after you switched the screen to R2L (using the Language pull-down menu at the top bar).

As for the Drupal 8 multilingual implementation, I strongly believe that Drupal 8 multilingual implementation is something ought to be studied by the FOLIO development team aiming to support the International markets at their best. As you can sense from the features list you have added as labeled “Content Translation”, such Drupal 8 multilingual improvements require the kind of non-trivial, not-anytime add-on technologies that can be coded later on; these technologies, in my view, require some consideration at the architectural level of FOLIO, and probably now is the best time to do so. If we are to say that FOLIO is made to be a language neutral from the bottom up, then library users anywhere in the world should be granted the nativeness feeling with FOLIO and its microservices apps if they should consider implementing FOLIO platform in the future.

To give you a feeling of how neutral and extremely flexible Drupal 8 multilingual implementation is, for developers like us who are expected to maintain a complete English UI and a complete Arabic interface for users who expect not only all messages, menus, dates, etc. to appear in their native languages and in the screen orientation they require, but also with Drupal 8 you can localize the content so that English users in L2R may see different content than that appearing for local Arabic users while in R2L.

To demo this feature, please take a look at our new company website, KnowledgeWare Technologies, where you can see that the content in R2L can be totally independent of the content shown when you switch the screen to L2R (English) orientation.

Imagine a local newspaper which is expected to serve a metropolitan community, like here in Riyadh we have labors from all over the world, and you want to control the news posted in such away that what interests locals and other Arabs readers may not interest people from other cultures like from Indian and Philippines. You can think of the same senario in the case of a Public Library OPAC, where English readers may only care about top English read books in contrast to what Arabic readers may like to see in the top list in terms of content that matters to them.

Great! Thank you, Massoud. I’ve passed along these comments to the development team.