A common theme emerging in the Acquisitions UI is a need for manipulating tables that display a variety of information. A number of other groups seem to be interested this type of functionality. The questions being raised now is what level of user should be able to adjust which columns they see in the table. Would it be beneficial to have a default be set by the administrator? Are there any other concerns with this functionality?

This screenshot is an example from the Funds module where you would be able to select the columns of information you would like to see associated with transactions. At a point you will have more columns then can be displayed on the page at one time and the table would begin to scroll to the right.

This reminds me of a couple other programs I work with. I think it’s a really valuable tool since each person using a table may be using it in a slightly different way or consider different data elements to be more or less important.

In SalesForce, when building a report, you can pick which data elements you want to show in a tabular report and which order for the columns to display in. You pick data elements mainly by clicking a toggle for the various elements within a list of data elements. You resequence the columns by clicking and dragging the column headers, so that the columns shift around on the screen. For reports, it can get more complicated than that, by adding calculated columns or coloring or such. That part is not so much display functionality though; that’s report functionality.

Another similar example is customizing the view of the main e-mail window in Outlook. Not sure how to add a screenshot in Discuss, but I’ll try to figure it out.

In the meantime:
When you right click on the column headers:
Arrange by: lets you sort and group by any of the columns
Field Sorter: lets you add columns (data elements) from a list of possible data elements
Then once you’ve added the column, you can click and drag the columns to rearrange the order on your screen.
Delete columns
Etc.

The main point is that the data is all still there underneath. The column/display function is just changing which ones show or not, and how the rows within the columns are sorted or grouped. 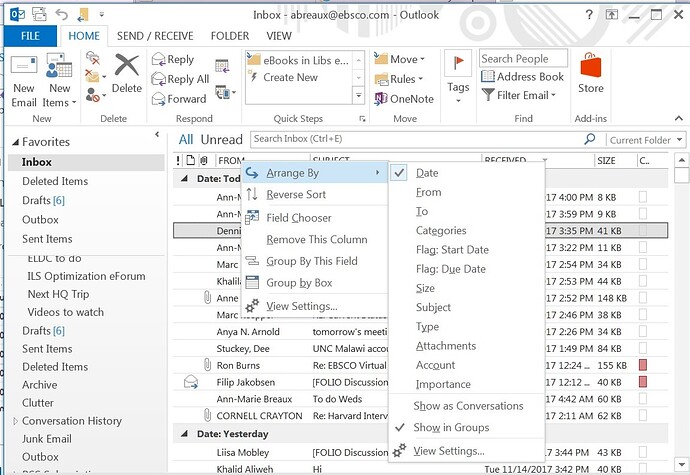 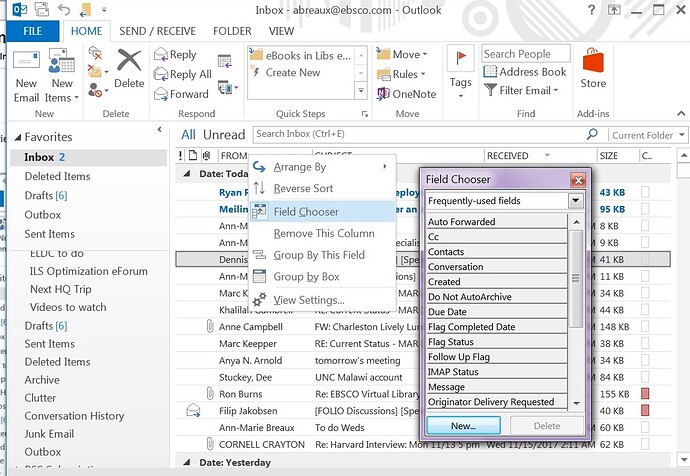 It seems to me that every user should be able to adjust which columns they see in their own tables, but an administrator should decide which columns a particular user level is allowed to see.

I would think iv every user has to set their own table view option would add a lot of complexity. Maybe defining roles in the library could be an option to avoid this complexity with still beeing flexible. Each role has a predefined set of table view options and a user selects a role for him/herselve when setting up a new FOLIO user account.

There are roles and groups planned for FOLIO, that were discussed in User Management. So you could define a “bibliographer/selector” group and set default settings for your selectors, and then each individual user could further customize them. I could see wanting to have a different view for Acquisitions staff who might need more details about the transactions, whereas a selector might really just want to see if a resource is ordered and/or paid.

As I think I mentioned earlier, having title information here would be really helpful too.