Over the weekend I watched the recording of a presentation by Carl Stahmer and MacKenzie Smith on their work to migrate a library’s metadata practices from MARC to linked data.

One of the main points of the presentation was the concept of a system that would translate linked data graphs between a triplestore and a traditional MARC-based ILS: 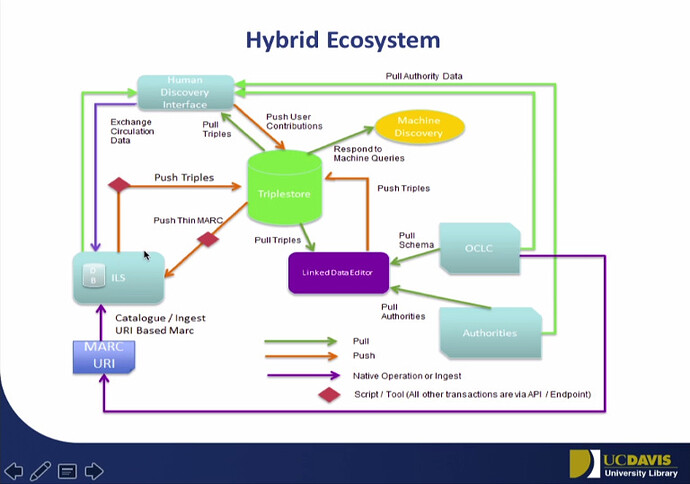 As I was watching this I thought about how FOLIO could be the driver for the “script or tool” mentioned in the presentation (and shown in the graphic above as a red diamond). There will probably be a need for FOLIO to talk with a legacy ILS database, so could we also arrange for FOLIO to be this bridge to a linked data triplestore of bibliographic data?

The presenters also talk about the need to mint and reconcile URIs for local authorities, so there is overlap with the Workshop on National Strategy for Shareable Local Name Authorities.

Carl and MacKenzie say that the final report from their work will be posted on their bibflow blog soon. I don’t see it there now, but it might be an interesting model to look at as we consider how the underpinnings of metadata management will happen in FOLIO.

This is an area of independent development efforts already underway that we may want to track and engage with - and encourage to look at FOLIO as a target for functionality. I’d specifically point to the various LD4* projects that center around Cornell, Stanford, Harvard, LoC, Columbia, and others. Additional work done at UC-Davis (referenced above) and work at UIUC could be relevant. I would suggest that this is an area where FOLIO doesn’t need to start a new, independent effort, but instead look to intersect and engage with this already active community. One starting point is at: https://wiki.duraspace.org/pages/viewpage.action?pageId=74515029.